The High Court of Kerala is the highest court in the Indian state of Kerala and in the Union Territory of Lakshadweep. It is located in Kochi. The High Court of Kerala came into being from 1st November 1956, with its seat at Ernakulam. Its roots go back to the Rulers of Travancore-Cochin, to Colonel Munro – the British Resident and Diwan in the Travancore State and the political agent in Cochin State- the architect of the well regulated judicial system in both these native states, to the High Court of Madras with its tradition of a hundred years and over, to the Travancore High Court, to the Cochin High Court and to the Travancore Cochin High Court. Till the time of Colonel Munro who was the British Resident and Diwan of Travancore, there was no provision for the administration of justice in the form of independent Tribunals. In order to reform the Judicial System, he submitted a regulation to reorganize the courts. Her Highness the Rani who insisted upon the preservation of the trial by ordeal passed the Regulation in 1811. 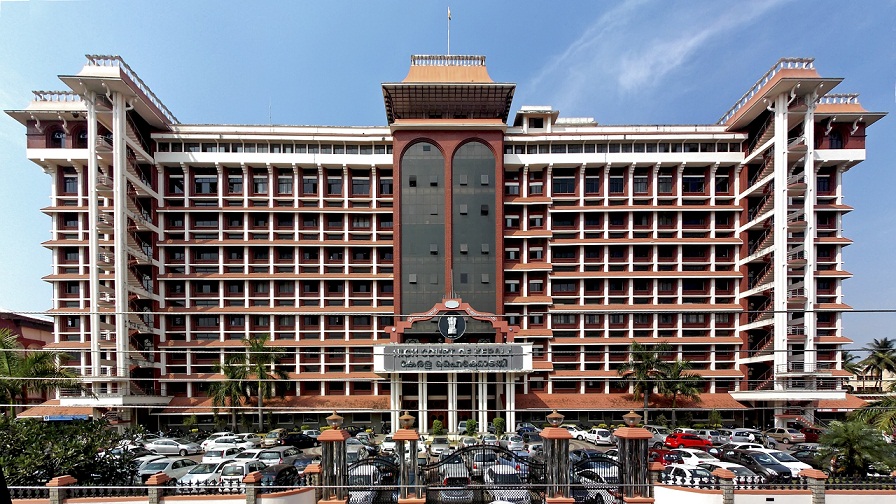 Kerala is a small state on the southwest corner of the Indian Union with a total area of 38,863 sq. Kms, having a population of 2,90,98,518. When India became free, Kerala, as we know it today, was not on the geographical map of India. It was under two Princely States Travancore and Cochin, and Malabar, which was under the direct administration of the British. The Princely States of Travancore and Cochin were integrated into the United States of Travancore Cochin on 1st July 1949. Malabar remained part of Madras Province. Under the States re-organisation Act, 1956 Travancore Cochin State and Malabar were integrated to form the State of Kerala, on 1st November 1956.

In 1811, Zilla courts were established and in 1814, a Huzur Court (Court of Appeal) was also established. The Huzur Court was the final court of appeal. The Sadar Court replaced this court of appeal (Huzur Court) in 1861. The Sadar Court practically possessed all the powers now exercised by the High Court, it functioned from 1861 to 1881. The High Court of Travancore was established in 1887 with five Judges, one of whom was the Chief Justice with a Pandit to advise the judges on points of Hindu Law, by the illustrious sovereign Sri. Visakham Thirunal of revered memory. The first Chief Justice of Travancore High Court was Mr. Ramachandra Iyer a young man of 35 then.

It was during the Diwanship of Col. Munro in 1812 A.D. that graded law courts came to be established for the first time in Cochin State. Prior to that Desavazhis and Naduvazhis settled disputes according to custom. More serious disputes were sometimes taken to the king himself. Col. Munro established two Sub Courts one at Trichur and the other at Tripunithura. A Huzur court of final appeal with three judges was also established in Ernakulam. This system continued till 1835. The Huzur Court was reconstituted as the Raja’s Court of Appeal and the Sub Courts were reconstituted as the Zilla Court. The Zilla Courts were given unlimited jurisdiction, but subject to confirmation by the Raja’s court of appeal. It was in 1900 that the Raja’s Court of appeal was reconstituted as the Chief Court of Cochin with three permanent Judges with Mr. S. Locke, Bar at Law as the first Chief Judge. Thereafter, during the Diwanship of Sri. Shanmukham Chettiyar, the Chief Court became the High Court.

When it comes to the selection process, the candidates have to take up a written exam / Interview. Selected candidates will be paid a handsome salary (as per Govt rules). The type of questions that are asked in the technical interview round differs from one position to another. There are multiple steps for the selection process for the posts of Stenographer, Clerk, Peon, Process Server, Gardner, Chowkidar, Liftman, Sweeper, Watchman, Chauffeur, Cook, etc. in the Kerala High Court. The procedure is as follows

We advise to you for other Kerala High Court Recruitment 2021 and selection process please read below official recruitment notification carefully before apply.

Know the current status of your case by Return SMS

Important: Case Number Record (CNR) is a unique Identity Number of each case, which remains constant. All the Advocates, Litigants, and stakeholders are requested to ascertain the CNR of their respective cases from the concerned Courts and to refer the same for all future references.